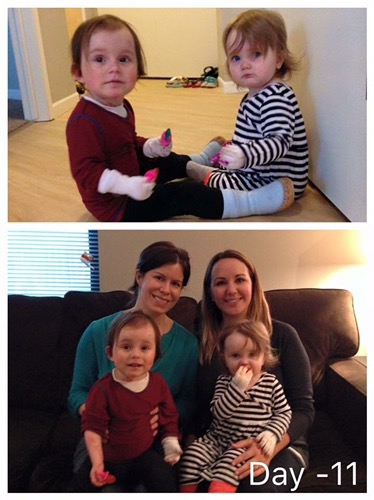 Day -11: Today was our last day all together until November. Kiira gets admitted tomorrow, so we spent the morning with Jenna, a happy, sweet girl who also has EB, and her wonderful mother, Adriana, and sister. They brought the girls some fun toys and treats and I think all the kids were happy to have someone to play with besides themselves. Thank you! Later, we took an outing and enjoyed the time together as a family.
Yesterday Kiira had an IVIG infusion to replace her low antibodies. It’s usually so much easier with the central line, but we discovered an issue with the line, so it has to get fixed or replaced in the OR early Monday morning, which means Kiira gets put under again. They are not delaying chemo though, so we will get her first dose at midnight tomorrow.
It’s surreal. I just try not to think about it–to think about how sick Kiira will be, or she’ll lose her hair again, or all the risks of a BMT. But we can’t do nothing. I shouldn’t have to decide between letting EB run its course or put Kiira through a BMT to help stop the progression, but we did decide and I pray, I plead with God to bring her through this successfully.