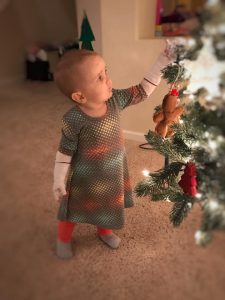 Day +118: The last week has been a whirlwind–two Thanksgiving meals, Christmas decorating, unpacking/reorganizing the house, visiting friends and family, and back to school/work this week. The girls all have a lot of fun together and I love watching them play and help each other out. It’s also been an adjustment, understandably. The girls had been without me for 4 months and now they have to get used to another parent around, but also want to be with me nonstop. We’ll get adjusted soon enough, but I’m just glad they show Kiira so much love and that we are all back together again.

We did find out Kiira’s CMV is back, so please pray that it goes back down on its own now that we are weaning off the immunosuppressants. We will retest it again next week. We also start feeding therapy soon since she still isn’t really eating. I’m hoping it will come back to her quickly after a few sessions. 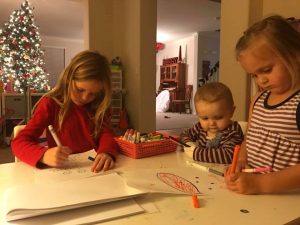 Over Thanksgiving I spent a lot of time thinking about how thankful I am for so many things. I’ve had amazing friends, family, and strangers show us support and it has really helped our family endure the hardships EB brought upon us. I’m thankful Kiira had 2 opportunities do a BMT, both covered by insurance. I’m thankful that though we had to do it twice, both times Kiira had no real complications. I’m thankful Kiira has had no strictures in her esophagus or infections in her skin. I’m thankful for my husband who did an incredible job holding down the fort here, but being so supportive of me from afar. I’m thankful EB has caused no developmental delays in Kiira. I’m thankful Kiira’s sisters love her and push her to achieve more rather than treat her differently. I can go on and on. God has provided in so many ways, through so many means. And though we still pray for a cure for EB, we are thankful we aren’t on this journey alone.