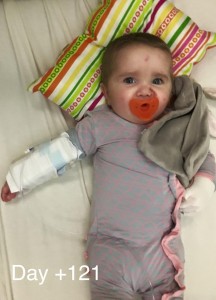 Day +121: Yesterday Kiira had IVIG to replace IgG, an antibody. It was a nightmare trying to get an IV in her. We tried 5 sites with multiple pokes at each one and I had to unwrap both hands to try the backs of her hands. She is so strong that we had 3 of us holding her down, 1 doing the IV and 1 distracting her but she just screamed for the hour that it took us to get the IV in. I don’t regret taking out the central line, but it certainly made things like this easier! Once we got the IV in, Kiira calmed down but cried every time she tried to lay on or use her arm. I was able to bring her pack n play so she took a little nap. The infusion itself only took about 3 hours instead of 8 like last time, but when we were done, we realized her arm was swollen, so the IV did pull out of the vein. That’s what happens when you can’t use tape on EB skin. Apparently the IgG can still get into her system subcutaneously, so it’s not too big of a deal, but her arm was sore until the swelling went down.

Other than the IV issues, the infusion went well. I also met with a GI doctor and nutritionist. They are on board with reducing Kiira’s calories because her growth curve jumped so high, but her weight to height ratio is low (basically she weighs too much for her height). It’s a good problem to have when it comes to EB though. In addition, they support blended food diets (blending real foods like meat, veggies, etc) rather than just giving her formula and eventually Pediasure, so I’m happy to have their support and guidance. Kiira is eating more by mouth, but not nearly enough to sustain her, so I’m very grateful for the g-tube.

Today Kiira is still doing great. Her arm swelling is gone and she was her normal, happy self, except when I did bandages. She is really showing her strength to fight me, but I was so relieved to find no injuries from yesterday when we held her down for the IV.

She won’t be trick-or-treating tomorrow night, or even dressing up, but Kiira gets a kick out of her sisters’ superhero costumes. Hopefully next year she can participate.

Thank you for your continued prayers. We really appreciate the support!