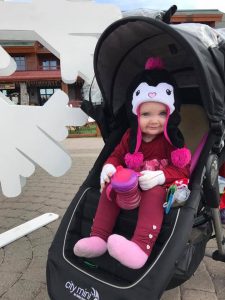 Day +126: We had some wonderful family time in Tahoe this past weekend. There were some experiences that showed me the love and generosity of others. I’m thankful for my mom, aunt and uncle, but also a few strangers who touched our lives. It still amazes me how God works through people, especially when they probably don’t even have any idea. So just remember, you may never know how your small (or big) gesture can affect someone.

As for an update on Kiira: Kiira developed a rash on Thursday that’s gotten worse. There are no other symptoms and it’s not itchy, so it might be Graph vs Host Disease (GVHD), which means Miia’s cells are attacking Kiira’s body. Though it can be a bigger issue, it’s a sign that Miia’s cells are effectively working in a Kiira’s body. They aren’t doing a biopsy to confirm it, but it’s somewhat typical as you wean off immunosuppressants. We hope it doesn’t develop into the gut or liver, but in the meantime, we are treating the rash.

Today we drew Kiira’s lab to recheck her CMV. I didn’t realize not all lab techs can draw from a central line, so it meant getting poked. There is a class I can take to teach me to draw blood from the lines, which I might do. It’s pretty amazing all that I’ve learned as I care for Kiira. I feel like I’m getting my nursing degree after all.

Thank you for your continued prayers. Kiira is still doing great and these little hiccups don’t seem to affect her at all.