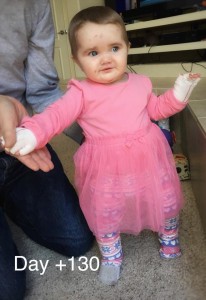 Day +130: It’s been an eventful weekend here. On Friday we put Kiira to bed before my aunt and uncle came to babysit so we could join friends to celebrate their birthday. Later that evening we got a text that Kiira had been crying for 40 minutes and was gagging and we didn’t know if it was because she was worked up or if she had a blister in her throat or what, but we were about 40 minutes away and terrified as we drove home, because usually Kiira sleeps well through the night and we haven’t heard her gag/choke in a very long time. Of course by the time we got home, she was back to sleep and appeared to be ok. The next morning, we could see a lot of mouth sores, so it’s possible a blister was further back, causing her to gag, but we’ll never know.

Later yesterday, the older girls got a fever. We kept Kiira in a separate room because if she gets a fever, she will be hospitalized for at least a couple days. It’s only been the first week back at school and already the kids are sick. I keep trying to make the right decisions for our family and no decision is perfect–I knew getting sick was very possible as the kids got back to their activities and we can all fight it off, but Kiira’s lowered immune system may not be able to. I hope Kiira can stay healthy, so please pray for her.

As for her hand injury–the layer of skin that detached on her thumb and pointer fingers are drying up. Eventually the skin will fall off and hopefully we’ll find stronger skin underneath if the donor cells went to that area. Kiira is back to using her hand normally, so we are so happy about that!

Kiira is eating more by mouth, which is really great. It does seem to be causing more mouth sores, but hopefully we’ll figure out what works best for her. She has 5 teeth coming in–one just popped through, so she wants to chew on everything, which doesn’t help.

We got word that we’ll be going to the Stanford EB clinic on November 20th, where we’ll see numerous specialties. We haven’t been since last December (such vivid memories of that day!) and they weren’t supportive of Kiira’s BMT, but the team is very knowledgeable about EB, so I’m anxious to go and show them a BMT isn’t such a terrible thing. We still don’t know if the BMT helped Kiira or if she is losing her transplant, but we’re trying to take one thing at a time.

To end with thanksgiving, it was so wonderful seeing friends on Friday night. With the girls sick today, we got to enjoy a rainy day inside, relaxing and my brother and dad came by for a visit and then my aunt and uncle brought us dinner. We love our friends and family and are so thankful for their presence in our lives!