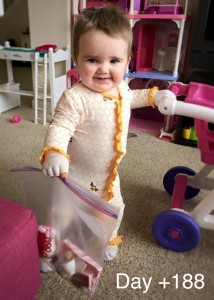 Day +188: As a parent, it’s awful to feel helpless. Right now all we can do is wait for a cure, but in the meantime Kiira has another huge blister covering the top of her foot by her ankle, wrapping around to the bottom. The bottoms of her feet have never been affected before and I somehow hoped they never would be so that she could walk with more ease, but now that it’s been injured, it’s that much more susceptible to injury again. This one is painful to her, so anytime she tries to stand, which is about every minute, she winces in pain and either stands on only one foot or falls down. All we can do is try to relieve the pain by popping the blister every time it fills, applying cream, and rewrapping her with ever-increasing bandages. Tonight, during a second bandage change today, the foot even looked swollen. Plus she now points to her fingers and does a half cry whenever they hurt, multiple times a day and deals with mouth blisters frequently. (Don’t worry–she is still overall happy). I’ve come to grips that Kiira has EB and will always have it, but seeing this new level of pain, where it’s starting to inhibit her, breaks my heart and realistically, it’s just the beginning…

There’s been a lot of discussion in the EB community about pain management. Most kids are on morphine or much stronger drugs and the push for marijuana use for EB (a more natural remedy) is prevalent. Kiira has never been on pain meds, besides a couple days after her gtube surgery and BMT. I’ve heard the drugs make the skin worse, cause personality and emotional changes including hallucinations and I have to imagine affects learning as well. I haven’t felt like she has needed them because her her pain is acute and temporary and things like distraction work so well during bandages changes. I wouldn’t give my other girls morphine for a cut on their knee, but when it becomes chronic pain, the need for better pain management will arise and we’ll cross that bridge when it comes.

We heard from Dr. Tolar about her biopsy report and it shows she *might* have very minimal collagen VII present from the October biopsy. His feeling is that you don’t need much, so it might be enough to make her skin stronger. Maybe it’s helping parts of her but not her fingers or feet, which are at their worst. It has only been 6 months and hopefully the donor cells are increasing and we will see better results in the next 6 months, but watching a lot of other stories confirms that a BMT is not even close to a cure–it just buys us time. I haven’t lost all hope–I know doctors are working so hard and gene editing trials on animals is getting further and more successful, but it’s still a long way off. Kiira was given to us for a reason, and it’s our job to not just care for her, but also show her the unconditional love of God until her cure comes.

On a note of thanksgiving, thank you to our bible study group for planning to bring Jason and the kids meals while Kiira and I are in Minnesota. In the midst of your own business and hardships, you are blessing our family and we are so thankful! Also to the girls’ school for promising to love on them while I am gone–I know it’s only a week, but it’s comforting to know they’re in good hands while I focus on Kiira.
Thank you for your continued prayers for our sweet girl!