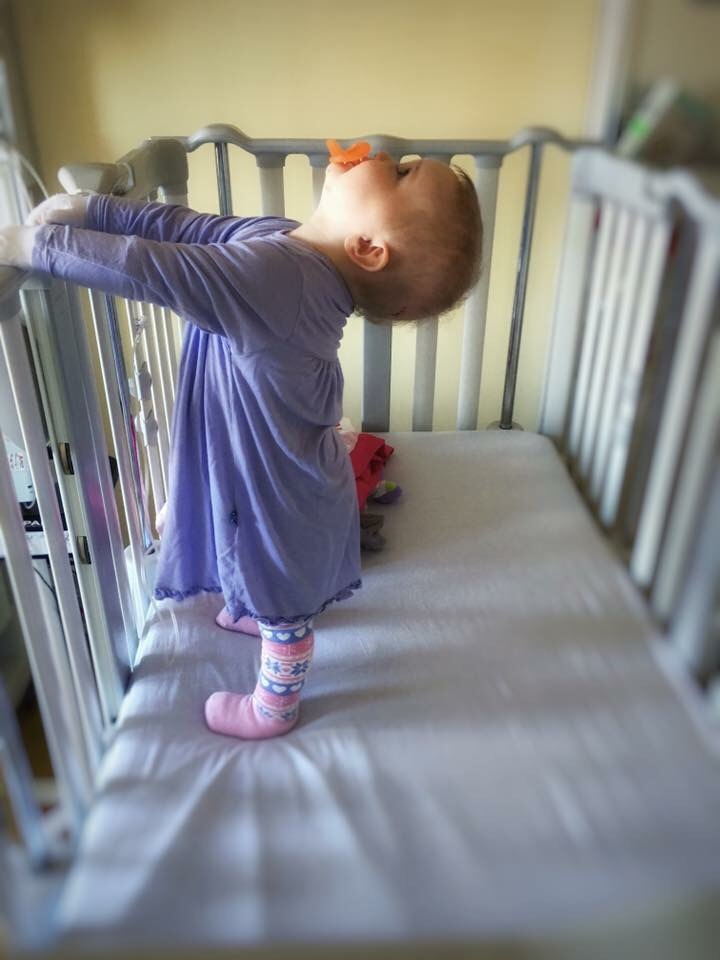 Day +28: Today I got a call that Kiira’s CMV levels were high enough that she needs treatment. CMV is another common virus that nearly all of us carry, and Kiira and both of her donors tested positive for it before the BMT, so they check her levels weekly to make sure it’s dormant. For a healthy human, it might present like a cold, but for immunosuppressed individuals, it can infect various organs and more commonly, cause pneumonia which often leads to death. They check levels frequently to catch it early and treat it aggressively. I was worried about EBV, the virus she had last year, and it could still come up, but CMV decided to take hold of her body for now.
So, treatment required an IV infusion in the clinic today of a high dose IV antiviral. Since it went well, I’ll be administering the IV doses myself 2 times a day for 2 weeks and then do a maintenance dose for another 6 weeks. At first this sounded annoying, but the alternative, which is still a possibility since her WBC counts are dropping, is going inpatient again for a more aggressive drug that throws Kiira’s electrolytes out of balance. Until those things are under control and CMV levels are decreasing, she would have remain hospitalized. Her WBC counts were marginal today so we are rechecking them tomorrow. I really hope her counts stay high enough to keep us out of the hospital.
Kiira is still in good spirits and doesn’t present signs of being sick, besides the runny/stuffy nose she had. We have an IVIG infusion tomorrow, which is common for us now and might help with CMV too. Engraftment results should be back by Friday, so we are anxiously waiting on those results too.
We did say goodbye to my mom yesterday. Kiira keeps asking for her Mimi, but now it’s just Kiira and me. BMTs are never promised an easy path, but neither is EB. So we keep fighting and taking each day as it comes.