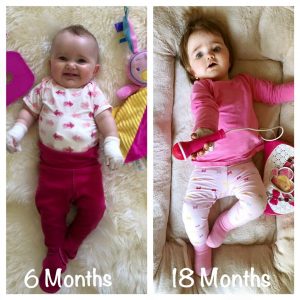 Day +287: On the 12th Kiira turned 18 months old. She is walking almost exclusively now, talking up a storm and finally, 10 months later, eating like a champ. We have so, so much to be thankful for. While others are fighting for their lives or in the hospital, time and time again, choking on esophageal lining or fighting infections, Kiira is home and thriving. My head knows I should be thankful, but the concern and anxiety is never ending. Now Kiira’s iron is low, so we are starting her on iron supplements. The back of her neck has been rashy (heat, hair, a shirt?) but now is full of crusted sores and blisters. It’s an area we’ve never had issues with and I hoped wouldn’t be, but it reminds me just because we don’t deal with an area yet, EB eventually takes everything. That is why we need a cure. There are some amazing doctors working hard on it and we pray that God helps them figure it out. Soon.