Day +96: Just to update everyone, Kiira is back home and sleeping after a long day at the hospital. The procedures all went well. She has another 5 holes on her leg where they took the biopsy, but it is close enough to her previous biopsy site that she will only have one set of scars. They tried to do the endoscopy through her gtube site, but the hole had healed up around the tube too well and they couldn’t fit the scope through so they went in through her mouth, which is a little scarier due to the possibility of damaging her airway. Everything went great though–there were no strictures and the inflammation that they saw in her initial scope is gone too! In preparation for her 6 month visit we will have to get her fitted with a bigger gtube, but I think that is a pretty simple procedure. The central line was removed without any issues and it is already so nice not to have those ports dangling from her chest.

We’re hoping to get the engraftment results during Kiira’s final clinic appointment on Friday. Praying for high numbers meaning no boosts! 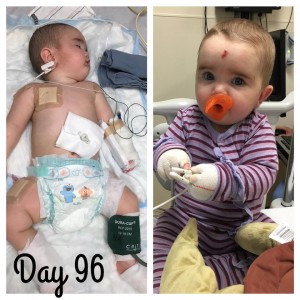