The past week has been eye-opening for Jason and me. We received a ton of encouragement, prayers, and support. We feel so loved and know that Kiira is loved as well! Thank you all!!

On Friday we received an email from Kiira’s geneticist telling us that based on her presentation they are classifying her as Recessive Dystrophic Epidermolysis Bullosa – Generalized Other (or previously known as non-HS). We were feeling slightly better about this diagnosis, but still had some doubts, because both mutations show patients that were classified as generalized severe (HS). We also found out that both mutations cause no Collagen VII formation, which means that no matter how much we try to protect Kiira, her skin won’t ever produce it and she will always be at risk, externally and internally and usually no Collagen VII is classified as severe. However, we have to keep remembering that Kiira has her own genetic make-up and some of that could override the lack of Collagen VII, making her have a more mild case. Whether she is non-severe or severe, EB will affect her drastically.

Some have told us we should get her a GI tube to keep her from losing weight and on anti-reflux medications right away to prevent severe, irreversible damage to her esophagus. So far Kiira is still eating really well and doesn’t spit up. However, it’s always in my mind to be aware of any little changes in her so that we make sure she isn’t getting internal damage.

We then talked to an EB mom who is traveling to Minneapolis to get her 5-month old a bone marrow transplant. The idea of such a drastic measure had barely crossed our minds, especially so early in her life. We have just kept praying that a miracle would happen and Kiira would be cured of the disease without any medical treatment, which can still happen, but after the conversation, we realized sometimes we do have to take action. Although Kiira might be presenting mildly for now, we learned that can change. Another conversation informed us that usually between 3-6 months we can see if things are getting more or less severe. A recent post showed us that even after a couple of years, things can take a turn for the worst, so this EB thing is all over the place–we can never go into a day thinking we’re safe from it’s hold on us, which is no way for us or for Kiira to live, and is why we’re now looking into our options to help better Kiira’s life.

The only clinical trial open to Kiira’s diagnosis and age is the bone marrow transplant in Minneapolis. A couple of helpful conversations and a review of the process is making us seriously consider this as an option for Kiira. It scares me to death because Kiira would have to go through a week of chemo and then go through the bone marrow transplant, most likely using one of her sisters as a match, and take on so many risks. She would probably be hospitalized for at least a month, but some have stayed much longer. A bone marrow transplant is not a cure, but would deliver collagen VII to Kiira’s skin as needed. Some problem areas, which I can already identify as her calf and heel, may remain problem areas until gene protein therapy is approved for her use. However, the way we look at it is Kiira will end up with these risks and more just with EB and if we have a chance to give her a better life, why wouldn’t we take it? Of course, we still need to see how things go over the next few months and if she remains mild, we wouldn’t pursue it, but we want to get the ball rolling since so few patients are taken. Thankfully Jason and I have jobs that would probably allow us to work from anywhere, so even if we ended up in Minneapolis for months, we could make it work.

To learn more about the procedure you can read it here: http://www.bmt.umn.edu/patients-families

So new prayers are needed to help us with this decision. If doors open for us to do it and she is a candidate for it, then we’ll take that as a sign this is how we should proceed, but if not, then we’ll just trust that God has other plans for her.

Kiira had been doing really well over the past week. We weren’t seeing anything new and her wounds were healing very well, but a few days ago she kept rubbing her face, causing a rash. We’re not sure if she is itchy or just a wild newborn who likes to fling her arms when she’s upset, but the rash hasn’t improved. We also discovered a couple new, tiny blisters on top of existing ones on her legs, which is where the scarring comes in. Every time we bandage her hands and feet we run our fingers between hers to make sure there is nothing webbing together. We’ve freaked ourselves out a few times when we see dead skin from one finger that looks like it’s connected to another finger, but we realize it’s not. So this is our reality.

In the meantime we’re close to finding an in-home nurse to help us out so that Jason doesn’t have to leave work early every afternoon. Miia (our oldest daughter) was really sick over the weekend, so Kiira and I lived in our bedroom all weekend while Miia infected the rest of the house and family. We pray that Kiira stays well as we don’t want to compromise her immune system since it’s so busy healing her skin. Being housebound for the past 4 days has driven us all crazy, but hopefully we’ll be able to get out soon!

Prayers for this week:

Thank you again for your love and support. We could not get through this time without your prayers, words of encouragement and and help with various tasks like research, ordering supplies, and bringing meals. We truly appreciate the blessings so many of you are pouring over us. 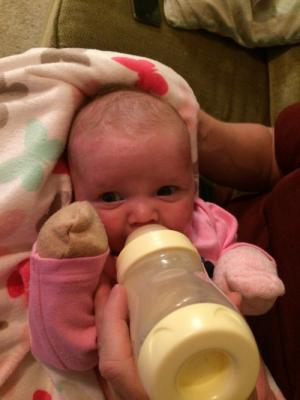