On February 19th, we took a flight to Minnesota to meet with Dr. Tolar at the University of Minnesota Children’s Hospital in Minneapolis to discuss the bone marrow transplant trial they’re conducting for EB patients. We left with hope and anxiety, wondering if what they would tell us would validate the feeling that this was the only option we have for Kiira. 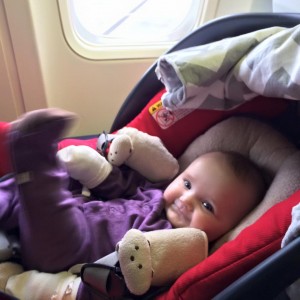 Kiira did great on the flight. She ate on the way up and the way down and slept between. I was so grateful she had her own seat since the flights were full and it would have been tough to hold her for so many hours. When we arrived in Minneapolis, it was a chilling 3 degrees, but we were only outside for about a minute at a time. We took a taxi to the hotel, ate dinner, and went to bed with anticipation in our hearts.

Friday morning, we made plans to meet up with a couple of moms who are in the area since their children had a BMT for EB. They’ve encouraged us and been so helpful in answering our questions over the last several months. When we arrived at the hospital, we were in awe of the facilities. The hospital was built only 4 years ago and despite having to be there under sad circumstances, they try to make you feel like home. We met with the moms first and saw their children. It was so nice to finally meet them in person after reading about them. Although there have been ups and downs in their journey, overall they’re seeing improvement, and that is what we want to hear. 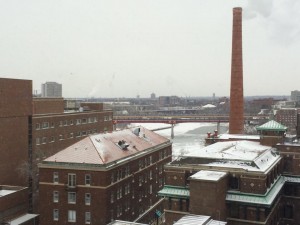 Next, we met with Dr. Tolar. First he examined her, but we didn’t have to unbandage her. He had photos of her, can see her unbandaged skin, and took a look in her mouth. The sound he made when he saw the healing blisters in her mouth indicated to me that it was what he was looking for, as though that was validation of Kiira’s need of a BMT. Next, he sat down with us and immediately made us feel comfortable. He reviewed past cases, current options, and future options and what it came down to, was that he recommended that Kiira have the BMT based on her genetics. He also reassured us that having a BMT doesn’t change who she is. A very quick description of how the BMT works for EB: Kiira produces no Collagen VII, which holds the dermal layer to the epidermal layer of skin. Inserting someone else’s healthy stem cells into Kiira, allows her body to produce healthy cells that tell the skin to make Collagen VII. Therefore, her skin (externally and internally), ideally, will be normal. Our understanding is that sometimes there are still problem areas, but there are some options that can help those areas heal completely. Before Dr. Tolar left, he told us Kiira is now his patient and he will do everything he can to help her. I felt the sincerity from him and I trust him and his judgment. 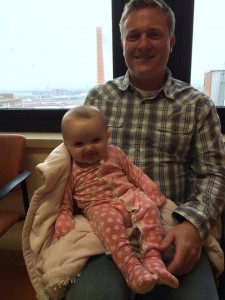 Next, we saw the social worker who had us sign forms of consent, talked to us about housing options for when we move there, and then took us on a tour of the hospital. I think Jason is most excited about the 60″ tv in the rooms, but the rooms are state of the art. I love that they have a star projector and soft lighting for Kiira. She will love it! We will have to be with Kiira 24/7 while she is in the hospital (which will be approximately 4 weeks if all goes well), so we will have to take shifts on who stays the night and the other parent will have to stay back with our other 2 kids. There is a couch and they provide linens, plus a desk with a computer so we can work in her room if needed. They told us the importance of limiting visitors because she will have no immune system. Even if she catches something normal like the flu, it’s a 30% chance of death. The facilities also have a ton of activities for the siblings, such as books, movies, crafts, a play room, and scheduled activities. They really try to make the experience as easy as possible.

After our tour, we met with the geneticist. While much of what we discussed had already been discussed with our geneticist here, she did answer additional questions. In case we weren’t already convinced, we learned there was another patient in the 90s with both of her mutations and that patient was classified as RDEB-HS (or generalized severe). Surprisingly, I wasn’t emotional about that. We have been feeling that Kiira either needs to be severe enough for this procedure, or we live with a slightly less severe case of EB, but still debilitating and we don’t have an option to help her at this point. 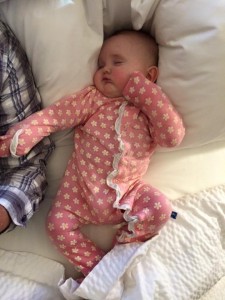 We left the appointment tired and hungry, but feeling like this is our path. Our questions have been answered and this will be our new home very soon. If we can get insurance coverage, we will be moving to the Minneapolis area around May (but now that we know this is our path, I would go tomorrow if we could), for at least 4 months. We went to dinner and then back to the hotel to go to bed early. Kiira took a mini nap on our bed and then decided to keep us up until 10:30pm. We had to wake up at 5am to catch our flight home, so we were beyond ready for bed. The return flight home went as smoothly as the flight there, so we feel blessed to have such a great traveler!

We did find out that Kiira’s sisters are not a match (they match each other, but not Kiira), but they found a complete match donor and several partial matches, plus cord blood matches. The complete match donor is our best option, so the next step is to contact the donor. We don’t know who it is and won’t know until a year after transplant, but the donor will have to have a physical and additional blood work. Then they get to choose the date that they can donate. We work backwards from that date. We have to be there for a week of evaluation and lab work and then the next week starts the treatment. The treatment includes 5 days of chemo and 1 day of radiation. They only do so much chemo to lower her immune system enough to take the new bone marrow, but not enough to kill off everything in her body. Then Kiira gets the bone marrow transplant and she is heavily monitored over the next few weeks to make sure that she isn’t rejecting it or getting any other infections. These are the most critical days of her life, but it can take a full year to really recover from this procedure.

Since our return home from MN, we talked to Kiira’s hematologist who is working on her approval of the bone marrow transplant and she felt it wouldn’t be an issue. I was shocked! I expected to file appeals or battle to get this done, and we still don’t have final approval, but hearing that was such a burden lifted off my shoulders. We also spoke to her GI doctor and scheduled a consult with a surgeon to get her a feeding tube. Although she doesn’t need it now and we hoped to avoid this procedure, it might be needed to feed her after chemo and we can administer medications through it. We are worried they will injure Kiira’s skin during surgery but the GI dr said they have experience with other EB patients and know what they cannot do (like use adhesives). Also, since they don’t want to use a scope down her throat for a laparoscopic tube insertion because of the damage it can cause to her mouth and esophagus, she has to have the tube surgically inserted. Although it’s taken us nearly 4 months to get to this point things are now moving quickly and doors are flying open, which is such an answer to prayer.

Prayers:
1. The G-Tube (feeding tube) insertion goes smoothly.
2. The complete match donor is still willing and able to donate to Kiira (and that they don’t have any underlying conditions that will cause issues later).
3. That Kiira’s condition doesn’t deteriorate before we get the BMT.
4. That the BMT will be successful and Kiira won’t suffer any other effects from it.
5. That we can find a place to live and the adjustment for our family is quick and easy.

4 Responses to Visit to University of Minnesota Children’s Hospital