What We Know So Far

The past week has been full of ups and downs. When we went in to have Kiira we fully expected to bring her home within a day or two. I was induced 8 days late and spent the next 23 hours anticipating the birth of a healthy baby girl. We still hadn’t decided on a name but we wrote them on the board in the hospital room and crossed them off one by one until we were left with Kiira Faith. Perhaps that was our first sign of divine intervention.

Kiira entered this world with a bloody lip and nipple, missing skin on her ankle and on her chest. We had no idea what was going on. The nurses wanted a closer look and the NICU doctor was called. She speculated a condition, but wouldn’t tell us until a dermatologist could confirm the next day. However, Google made it easy to figure out what she speculated.

After seeing her “owies”, as the girls say, our hearts sunk. She was taken to the NICU within the hour and she was treated like a typical NICU patient. They did a heal stick and an IV, and we didn’t know to wrap her up, so all of those actions caused more damage to Kiira.

The day after she was born, Kiira was seen by a dermatologist who told us he thought she had junctional EB since we saw signs of blistering in her mouth. After researching the disease we feared we would have up to 2 difficult years with Kiira–her short life would be full of pain and hospital stays, battling conditions like malnutrition and the inability to breathe. I was devastated.

We we spent the next few days learning how to best bandage her to keep her from hurting herself further. We, including every nurse treating Kiira, watched a video and read an instruction manual on Stanford’s website on how to dress EB wounds. At first, the dressings took us nearly all day, but a week later and we are under 2 hours.

Initially we were popping multiple blisters, but as the week progressed we saw fewer new ones and old ones were healing, which was so encouraging. We were also updated by the dermatologist that after showing pictures to other pediatric dermatologists in the Bay Area, they think she has EB simplex. We were so relieved– with her healing progress and a possible better diagnosis that gives us much more hope, we felt like we could be dealing with a very mild case. We were seeing the prayers answered!

Then we were told that supplies to heal her wounds were not covered by our insurance. We had read that some people spend $10k/mo on wound care. While supplies shouldn’t be that much for us, we knew it would be extremely costly. We also thought we might get an in-home nurse to help us, but that’s not covered either. It was taking 4 of us hours to do the dressings, but now that Jason and I can do it in less than 2 hours, if someone else holds a pacifier or bottle for Kiira to keep her calm, we feel better about bringing her home.

We we were also planning to bring Kiira home today and everyone was on board with that, until the dr came in on Monday night to tell us she has a moderate infection on her feet. We were to give her topical antibiotics twice a day, which means changing the dressings on her feet twice a day. If it didn’t improve, we would have to do IV antibiotics, which would keep her from sepsis, but create another wound. 9 days ago, I never thought I’d be making such tough decisions. We prayed a lot and God answered our prayers so far. This morning we did her dressings and the feet were looking better and the dr thinks we will be able to avoid the IV, but they will check them again tomorrow. Later this afternoon, the infection specialist came in and looked at her feet. He felt the infection only requires topical antibiotics and we can probably welcome Kiira home tomorrow!

So so the next steps are to get her home, figure out how to get supplies, and take her to Walnut Creek on Monday to see the pediatric dermatologist who worked with Stanford.

We we ask for continued prayers that her infection clears, for total healing, energy for Jason and I to juggle our 3 girls, work, and life in general, and a way to provide the supplies to care for Kiira. 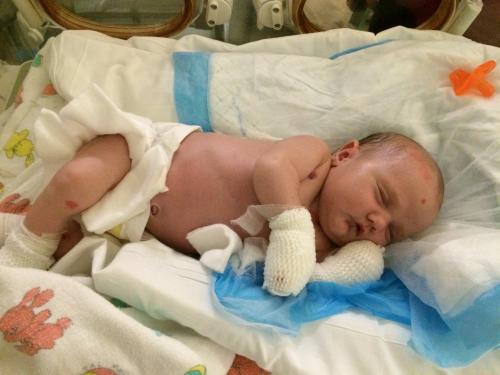