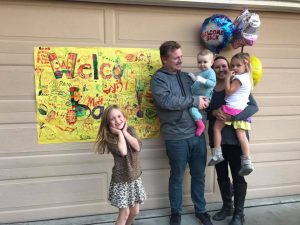 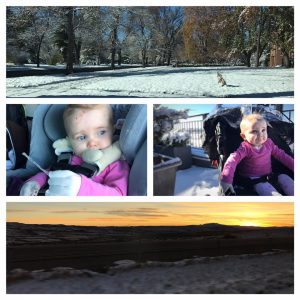 Day +107: Yesterday we drove through Kansas to Colorado and hit a snow storm. Accidents were happening all over and sometimes it was hard to see, but thankfully we made it safely to our hotel and had a restful night.

Today we wiped the snow down from the car and headed through Colorado to Wyoming and finally Utah. It was sunny, but temperatures were in the 20s and we are not very prepared for such cold conditions.
We are taking a driving break tomorrow, but Kiira is so good in the car that it makes these drives much easier. We love exploring the beautiful country and glad that this road leads us home. 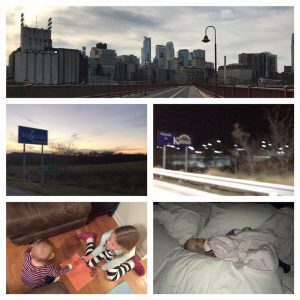 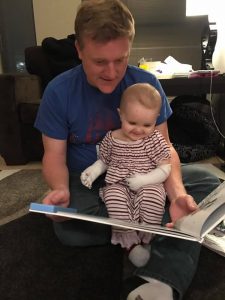 Last night we picked up Jason from the airport and Kiira was thrilled to see her daddy. She wanted him to read to her and do everything for her. I’m glad she fell back into routine with him so easily. Aside from a couple day visit in October, it’s been over 3 months since he and the girls went home and it’s wonderful to be together again.

Today we had our final appointment in the clinic, a full 9 hours, and we had a mini reunion with EB families in the area. People from around the world come to Mn for treatment and we all have an incredible bond because of EB. I wish Kiira could’ve been down playing with the other girls, but she was getting MSC cells from Miia (2 of 3 sets), inhaled antibiotic, and a flu shot. We said our goodbyes to the doctors who have been an enormous help to us over the last 2 years. We will see them again in January, but this has been our home and Kiira gets so excited to see them. When we told her we weren’t going to the hospital anymore she said, “awwww” in a tone of disappointment. The day wouldn’t have been complete without more music therapy too.

I wasn’t sure about going through a BMT a second time, and how it helps her skin is still to be determined, but now it’s coming to an end and I’m confident we made the right decision. I’m thankful for the experience and God’s provision for our family as we navigated through this challenge. We head west on Wednesday to rejoin our family and friends early next week! 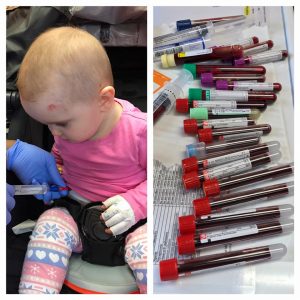 Day +96: Today is engraftment study day! The clinic drew 21 vials of blood for a variety of tests, including the 100 day engraftment test to see how many donor cells Kiira has. We are hoping it’s still 100% donor! We also found out that Kiira has 7% of Miia’s cells in her skin. This amount isn’t significant, but it’s good to see that some is present.

We spent most of today’s appointment discussing our plans to go home next week. After we get results from today’s test (late this week), we’ll plan on weaning off the immunosuppressant and the IV magnesium. We can also drop off the anti-fungal and anti-viral drugs in a couple of weeks. However, they decided to give Kiira the inhaled antibiotic that requires us to go in once a month for treatment and we start that on Wednesday, along with our flu shots. It’s possible we can switch back to an oral version in the future, but the team is being extra-cautious with Kiira’s immune system, which I appreciate.

Kiira continues to do well. Her favorite new saying is, “That’s silly mama!” and she runs around, purposely standing precariously on things like books. It makes me anxious, but she gives a sly smile, like a typical 2-year old who knows they’re not supposed to do what they’re doing. Let’s just hope the BMT is working on her skin fast enough to keep up with this dare devil. 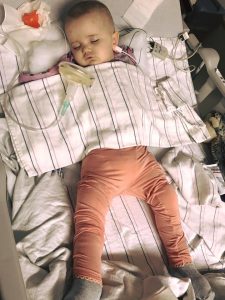 Day +91: All went well today in the OR. Kiira had a biopsy on her leg and they ended up doing an echocardiogram in recovery, which was planned for Monday so it was nice to get it out of the way. After a short nap today, she ran around nonstop for hours, as though nothing happened today. She wore herself out and was in good spirits.

Thank you for your prayers! 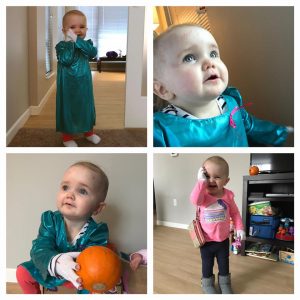 Day +89: Last week Kiira had a swallow study. It did not show any strictures in the throat or upper esophagus, which is great, but she is still choking on soft solids such as avocado. Our next step is to resume feeding therapy when we get home and hopefully she will pick up the proper eating technique quickly.

Today’s clinic appointment was quick and uneventful. Kiira’s white blood cell count’s are back to normal and CMV (virus) is still detectable but below the treatable amount. We are staying off IV meds and can plan to go home in two weeks.

On Wednesday Kiira will go into the OR for a skin biopsy to determine if she is producing any collagen VII yet. It is a routine procedure but prayers are still appreciated.

My aunt left yesterday after a 10 day visit. It was so nice to have an extra set of hands to entertain Kiira. I even got a night out with a friend which was so nice. Thank you for your help! Jason will arrive in two weeks to drive home with us. It is hard to believe we are wrapping up everything here and we may have had to do the BMT twice, but it could not have gone any better both times and I’m so thankful for that! 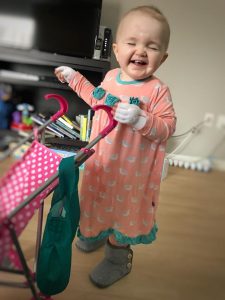 Bandages: Kiira is still using bandages donated 2 years ago by many of you (and still have plenty of most things). We cannot express our appreciation adequately in words. Our insurance still doesn’t cover them and they can cost thousands of dollars a month. When Kiira was born 2 years ago, I was so stressed about providing her with what she needs to reduce wounds and infections, but God used a number of people who came to Kiira’s aid and subdued my worries for over 2 years! We learned how to reduce waste and reuse bandages when we can, but I felt like we witnessed a miracle of never-ending supplies. We have even sent some overseas to help others in need of bandages, because unfortunately not everyone has those resources. Without a cure, bandaging the skin is the only protection we can provide to those with EB. Several organizations and fundraisers rise up to help support those families, like debra.org and IrefuseEB.org, but many families still have to do fundraising on their own to cover supplies, copays, lost wages due to so much time off to care for a child with EB, special clothing, and so much more.

Thank you for blessing us. It helped Kiira be as healthy as possible and relieved so much stress for our family. Thank you!
#EBAwarenessWeek. #WeFightEB 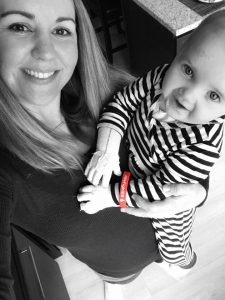 Sometimes waiting for a cure takes too long. It requires too much money, time, trial and error (and patients to be a part of those trials but when there’s only one in a million, that doesn’t leave many to try it), and red tape. Plus, the only way to cure EB is genetic modification, which is very controversial and extremely difficult to do. So, in the meantime, there are organizations like debra.org who help patients with bandages, tips, and other resources to make life with EB easier. We are thankful to them and the EB community for keeping us up-to-date on bandaging techniques, creams, medications, clinical trials and other things we can do to help Kiira. However, it couldn’t be possible without funding, of course. Consider donating to debra.org to help those with EB.
#EBAwarenessWeek #WeFightEB

We may have done a bone marrow transplant to keep Kiira from blistering as much and help her heal faster, but EB is still very much a reality in our lives. Just a few months ago (pre-BMT), this is what her feet and knees endured. Though we see less of this after the BMT, yesterday she stepped on something, blistered the bottom of her foot and could not walk. I carried her wherever she wanted to go and it broke my heart watching her attempt to push her stroller when the pain was too much. EB is harsh, but Kiira pushes through with unimaginable strength and despite the pain in her foot, she made herself walk around today.

EB affects about 1 in 20,000 people and Kiira’s subtype, RDEB, affects 1-2 in a million. Though research has made enormous strides despite being so rare, we have a long way to go to find a cure. We support the work of Dr. Tolar and the team at the University of Minnesota who actively seek a cure for EB, and if you want to help find a cure for Kiira, 100% of proceeds to irefuseEB.org go toward that research.
#ebawarenessweek 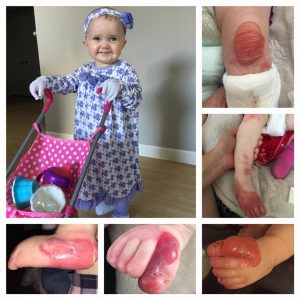